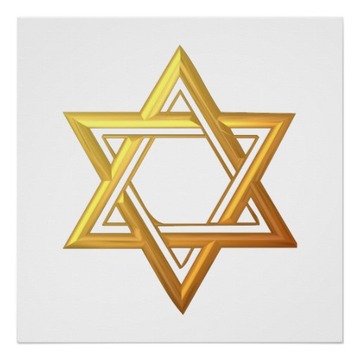 The Star of David, known in Hebrew as the 'Shield of David' is a recognized symbol of modern Judaism. Before the Star of David became representative of the Jewish community, it first belonged to the Zionist community. And centuries before the symbol's known usage was in a Jewish synagogue, it was used in Christian churches as a decorative motif.
Holocaust Relevance
A Star of David was used by the Nazis during the Holocaust to identify Jews. If a Jew was found without wearing the Star, they could be severely punished and subjected to beatings and sometimes even death. There were two different colors of the Stars. For the General Government, a white armband with a blue Star of David on it had to be worn; for the Warthegau, a yellow badge in the form of a Star of David had to be worn.
(http://www.jewishvirtuallibrary.org/jsource/Judaism/star.html)
Star of David Quizzes
Powered by